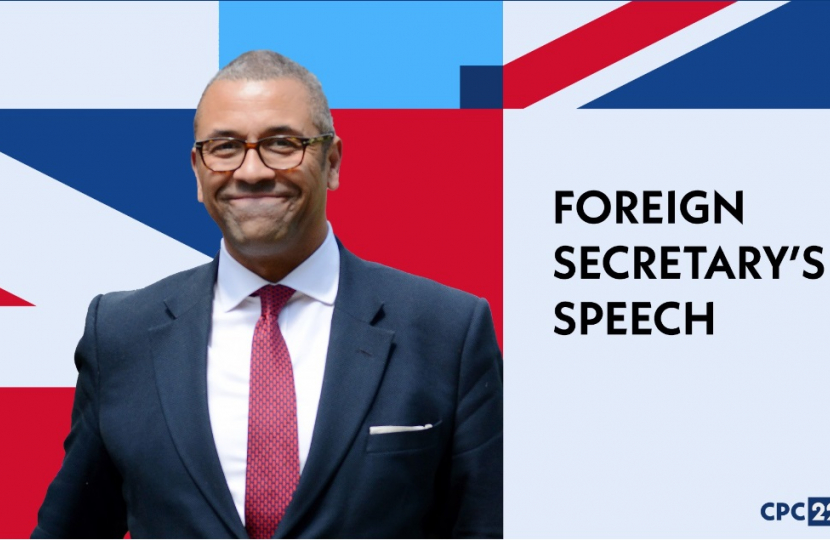 James Cleverly, Foreign Secretary, speaking today at the Conservative Party Conference 2022 announced how we are using our influence abroad to create a better future.

Here is what he said:

It’s great be back together,

Big thank you to Jake Berry our chairman

Organising conference is a mammoth task.

And a big thank you our party staff, our volunteers,

And you, the members.

I loved being party chairman,

working with you all, with Ben my co-chairman,

And working alongside Boris.

And if I remember rightly we did alright.

…Got us through the Covid…

…And he led the world in support for Ukraine.

It’s a legacy that we should be proud of.

And I was proud to serve under him.

It’s a legacy that Liz Truss will build on.

…her steadfast support for Ukraine and standing up to Russia…

…her passionate defence of our Union…

…her determination to promote democracy and freedom around the world.

As Prime Minister she is also being bold.

…ensuring you can see your doctor promptly…

Reducing the taxes paid by ordinary, hardworking people across the country.

I backed her from the start:

And I know I made the right choice.

I’m the foreign secretary of the United Kingdom of Great Britain and Northern Ireland.

It is an honour to be the face and voice of our country overseas.

I’m pretty good at sales, it was how I paid my bills.

But I know that the greatest salesperson that the UK ever had was her late Majesty Queen Elizabeth.

I’ve had the honour of meeting King Charles,

and be our new chief ambassador.

During the funeral week of her late Majesty

I was reminded of the standing that our country has in the world.

When I travel on behalf of our country,

I am lucky enough to see the UK as others see us.

And I can tell you the view of here, from over there is really, really good.

It’s not a terribly fashionable thing…

To be proud of your country…

My mother chose to make this country her home.

She was a young woman from Sierra Leone who adored this country then,

Just as I adore this country now.

I am from immigrant stock on both sides of my family:

My mum came here from West Africa in 1966

And my dad’s family came here from Normandy in 1066.

There will always be people that talk our country down…

Who hate our country’s every success…

And pray for bad news.

Those people who aren’t happy until they’re unhappy:

They want to stand on the side-lines,

Only moaning and bleating.

But that isn’t us;

That isn’t this party;

That isn’t this government;

That isn’t this country.

We aren’t commentators watching the match,

And saying “Ohhhhh I wouldn’t have done that”.

We are players on the pitch…

Competing on the world stage for what we believe is right.

And we believe in freedom.

We believe in the rule of law.

We believe that an aggressor cannot invade its neighbour with impunity.

This is why we stand shoulder to shoulder with those brave Ukrainians defending their homeland.

And Britain has the strategic endurance to see this through to their victory.

Back in February this year, at the United Nations I said that if Putin was foolish enough to attempt to invade Ukraine,

The Ukrainians would defend their country ferociously.

And they have done just that.

Their bravery and passion has been amplified by the arms and training that we, the UK, have supplied.

We will support them until this war is won.

We will support them until their sovereignty is restored.

We will support them until the last Russian tank is dragged away by a Ukrainian tractor.

We need to have the strategic endurance to see this through to the end.

Because, if we don’t…

we send a message to every potential aggressor that our resolve is fragile.

We cannot, must not, will not send that message to the world.

And if you happen to be listening to this speech, Mr Putin, Mr Lavrov:

Let me be clear:

We will never recognise the annexation of Luhansk, Donetsk, Kherson, Zaporizhzhia, or Crimea.

And when Ukraine has won this war,

then we will support them as they rebuild their homes, their economy, and their society.

We will work with our friends and allies around the world to hold the perpetrators to account.

To punish those who use rape as a weapon of war;

To punish those who knowingly target civilian infrastructure;

To punish those who murder women and children

We do not do this alone.

We are a member of many international groups:

We intend to build more alliances, friendships and partnerships around the globe.

It’s why we have ambassadors, high commissioners, and diplomats in hundreds of locations.

It’s why I and my fantastic team of ministers travel the world.

Trust me, it isn’t to stock up on those giant Toblerones.

When there is war, our work on the international stage is visible and obvious:

Building coalitions of condemnation at the UN for example,

Coordinating sanctions against those who facilitate the war,

Working to ensure the exports of food and fertiliser from the Black Sea ports.

But much of what the FCDO does is less visible,

But no less important

I have just returned from a series of meetings in East and South East Asia.

I paid my respects at the funeral of Japan’s former prime minister Shinzo Abe.

Then I went to the Republic of Korea;

And then to Singapore;

In each country I met with senior ministers;

I set out the details of our Indo-Pacific tilt.

It’s a part of the world which is growing fast.

And through trade agreements, cooperation agreements, and our ASEAN dialogue partner status,

We are shrinking the distance between us.

I spoke about the opportunities that at available to us all.

And, of course, I spoke about the role that China plays in the region and globally.

I made our position clear:

That China could and should take a different path;

That it should adhere to the rules and norms of the international community;

And it should stop persecuting its people at home and stop sanctioning my friends and colleagues in parliament.

And while I was on the other side of the world,

FCDO ministers were in the USA, in European capitals, in Africa,

And a number of my ministers are overseas as I speak.

Because we have to invest in our international relationships.

And yes, we invest money.

Because that’s how we generate influence on the world stage

And that’s how we drive improvements in the lives of people overseas,

And how we improve the lives of people here in the UK.

The development money that we spend,

Our overseas development assistance or “ODA”:

It helps women and children brutalised by conflict,

We use our expertise in financial services through British Investment Partnerships to amplify the money that we provide to part-fund projects that generate green energy,

And stimulate economic growth in some of the least developed countries.

We don’t just stand idly by and watch problems happen:

We step in to improve things,

Not passive, but active.

It is the right thing to do, it helps people that need our help.

And it also helps us at home.

Because safe, secure and prosperous countries don’t generate refugees or hundreds of thousands of economic migrants;

Safe, secure and prosperous countries are good trade partners for us;

So obviously we want to see more safe, secure and prosperous countries.

That is the active role that our ODA plays.

But just because we look to build peace and prosperity in distant places,

we mustn’t forget the need to build prosperity closer to home.

A good diplomatic and economic relationship with the EU and its member states is good for us all:

we’ve worked closely on sanctions against Russians who have enabled the war in Ukraine.

I want to see more cooperation across the channel and across the Irish Sea,

And addressing the current problems with the Northern Ireland Protocol is key to that.

I want to ensure that we restore the integrity of the UK internal market,

I want to protect North/South trade,

and restore the balance of the Belfast Good Friday Agreement, which has been disrupted by the protocol.

I want to see all the communities in Northern Ireland represented again in the Stormont executive,

So that devolved government is re-established.

I will work hard to get that.

We agreed on our desire to reach a solution that works for all parts of the UK, especially the people of Northern Ireland;

We have the Northern Ireland Protocol bill working its way through parliament.

In the meantime, we continue to pursue a negotiated settlement which respects the constitutional integrity of the United Kingdom and our single market,

and supports the institutions of the Belfast (Good Friday) Agreement.

As you can see my great ministers Vicky Ford, Jesse Norman, Leo Doherty, Zac Goldsmith, Tariq Ahmad, and Gillian Keegan and I have plenty to keep us busy.

But it is a job worth doing.

And I speak for the ministers and the civil servants and diplomats in the FCDO when I say:

It is an honour to represent the United Kingdom of Great Britain and Northern Ireland:

It is a great country

A country I am proud of

A country I love