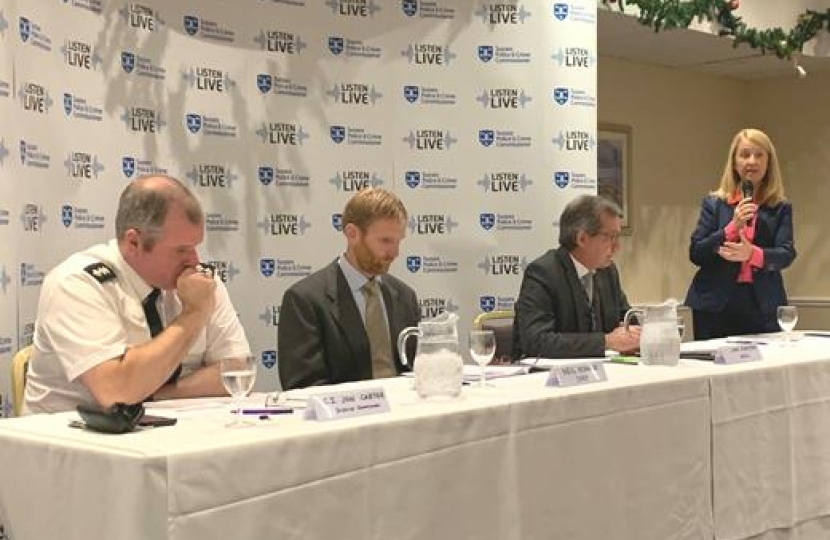 A policing update from the Sussex Police and Crime Commissioner, Katy Bourne OBE

On Wednesday I convened the first Road Safety Summit for Sussex, bringing together experts in this area to hear the concerns of the public.

The meeting covered everything from the 'fatal four killers' - drink/drug driving, driving while distracted, not wearing a seatbelt and speeding - to issues around routes in rural villages and provisions for cyclists, pedestrians and equestrians.

District Commander for Chichester and Arun District, Jon Carter, revealed that in 2018: 50,990 people were prosecuted due to speeding offences; 1,860 for drink/drug-drive offences; 797 for not wearing a seatbelt; and 473 for using a mobile phone whilst driving.

C/Insp Carter said: "My message is simple: treat the roads with respect and treat your fellow road users with respect."

It's clear that residents want to see more enforcement and preventative education to improve road safety. We are investing into the roads policing unit, so I want to make sure we spend in the right areas. The outcomes of this event will help us set the priorities for next year.

In 2015, coercive control was recognised in law as a form of domestic abuse (DA). Four years on, it is still not widely understood and people are often not aware until it escalates.

Sussex Police has launched a campaign to raise awareness of the wider aspects of non-violent DA, helping people to recognise the intial warning signs and encouraging them to report.

Over the last year I have invested over £400,000 into DA services across Sussex, from which local charity RISE has benefitted. To show my support, on Monday, I visited them to meet victims who wanted to help raise awareness by sharing their stories.

I met with Sara and Carol (not their real names) who described their relationships with former partners as being ‘incredibly toxic and unbalanced.’ For many years they were ‘blinded by the intimidation and emotional blackmail’, not recognising that they were in an abusive relationship as they had 'only known abuse to be physical’.

If you have been a victim of any form of DA, you can find help and support here.

MPs TO MEET MINISTER OVER A27 LITTER

Maria Caulfield MP and neighbouring MP Caroline Ansell are to meet with the roads Minister to request that responsibility for clearing litter from the A27 is transferred from local councils back to Highways England.

The public's concerns were heard by all members of the panel and will be acted upon.