NEWHAVEN ROAD 'ON TRACK' DESPITE STORMS AND PANDEMIC

THE PROGRESS of work on a new road which will drive regeneration in Newhaven has survived two major storms and a global pandemic to stay on schedule.

Newhaven Port Access Road is on track to meet its autumn completion date despite work being stalled by storms Ciara and Dennis in February before the country went into lockdown at the beginning of the Covid-19 crisis.

With social distancing rules in place, contractors have been able to safely continue work on the road which will ultimately create a direct access to the East Quay and allocated development land and open up 80,000 sq m of business space, allowing the creation of new jobs.

Construction of a bridge deck over the Seaford to Newhaven railway line and Mill Creek, the main engineering challenge along the route, is now well underway after 500 tonnes of steel beams - some the length of six buses, were delivered to site under police escort over several days in November, December and February.

Cllr Rupert Simmons, East Sussex County Council’s lead member for economy, said: “We are extremely grateful to all of those involved in this project who have faced major obstacles and done everything they can to overcome them and keep the scheme on track.

“There is still some way to go before the road is complete, but construction of the bridge deck is a major step in this hugely important scheme which will act as a catalyst for regeneration and create much-needed jobs for people in the Newhaven area.”

Installation of the bridge beams was only possible with a 1100 tonne crane, which had to be dismantled and repositioned to complete construction from both ends, while the railway line below remained closed.

Embankments have been built on the northern side of the bridge using 108,000 tonnes of material brought in via the port of Newhaven, and work has now started on the remainder of the concrete bridge deck and the new road and footways that will pass over it.

Work has also begun on footpaths to the south of the bridge which will connect to the existing footpaths and allow pedestrians crossing the bridge to access the footpath network south of Mill Creek.

Drainage, surfacing and landscaping work will continue throughout June and July.

The Newhaven Port Access Road scheme is being funded by a £10 million grant from the Local Growth Fund money through the Coast to Capital Local Enterprise Partnership and £13.2 million from the county council’s capital programme – money set aside for one-off projects.

Update on Vaccine Roll Out In East Sussex from Lewes MP, Maria Caulfield

I wanted to update you on the local roll out of COVID vaccines in the local area as I appreciate many are anxious to find out when they will get theirs.

The main engineering challenge along the route, is now well underway ... 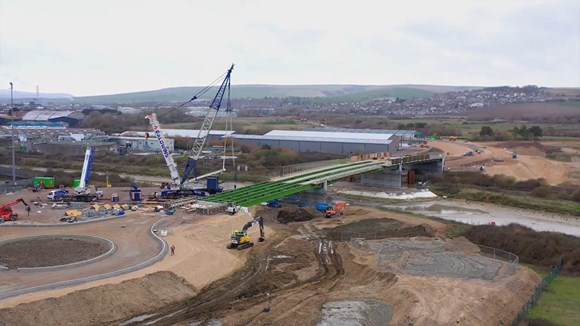 For more information about the Newhaven Port Access Road and the work taking place, is available at https://www.eastsussex.gov.uk/roadsandtransport/roads/roadschemes/newhaven-port-access-road/scheme-details/