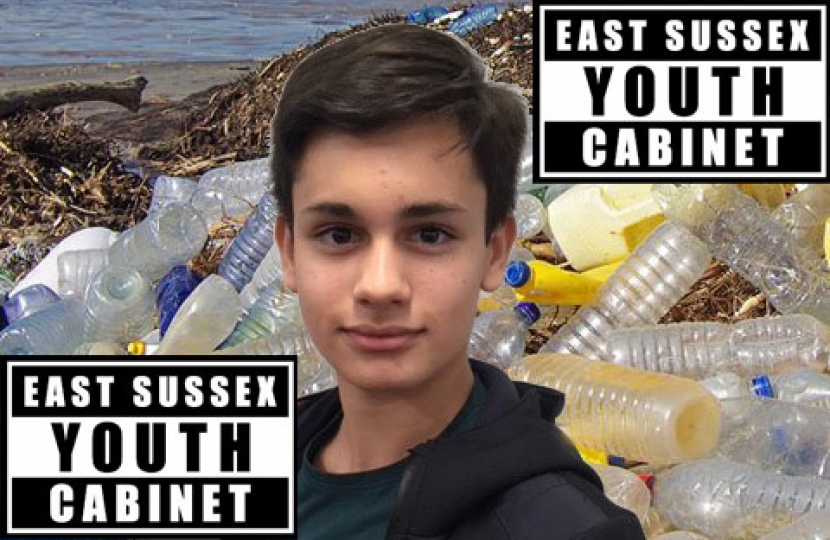 A motion to stop plastic pollution has been chosen as one of the UK Youth Parliament’s (UKYP) 2021 campaigns following a successful proposal by Youth Cabinet member James Jenkins.

James has been a member of the East Sussex Youth Cabinet since November last year, and was elected the member of the Youth Parliament for Eastbourne and Coastal by his peers in January 2020. At the UK Youth Parliament annual conference in August James proposed that “Stop Plastic Pollution” be included as an issue on the national Make Your Mark ballot.

Make Your Mark is the largest youth consultation in Europe, where young people aged 11-18 across the UK are able to vote on the issues that matter to them.

Cllr Sylvia Tidy, lead member for children and families, said: “I am delighted to hear that James spoke with such passion that the members of the Youth Parliament voted to include “Stop Plastic Pollution” as one of ten national priority issues young people could vote for this year.”

Voting took place across the country during November and it became clear that Britain’s young people still have a desire to tackle climate change, with James’ motion securing over 18,000 votes. Following the vote, “Stop Plastic Pollution” was chosen to become an elected priority campaign for the UK Youth Parliament over the coming year.

This is the first time that an East Sussex Youth Cabinet proposed issue has been elected as a national priority.

Cllr Tidy added: “East Sussex Youth Cabinet members have been successful in getting issues on the Make Your Mark ballot previously, and we are incredibly proud that James’ motion has gone one step further and been chosen as a Youth Parliament national campaign. His hard work has paid off and will shape young people’s environmental campaigning for 2021.“

Talking about his achievement, James said: “I put forward a motion with Zahra Khan (MYP for Reading) to stop plastic pollution, as we feel that climate change should be treated with more urgency.

“We’re very proud to have received national backing from thousands of young people across the country enabling this to become a UKYP campaign.

The Seaford Head School pupil added: “I look forward to working with my fellow East Sussex Youth Cabinet Members and the Youth Parliament to create real, lasting change for the better.”

For more information on the East Sussex priority campaigns and the work of the Youth Cabinet please visit https://www.c360.org.uk/blog/category/rightsandvoice/youthcabinet or contact the team at participation.team@eastsussex.gov.uk

Lewes Conservatives' Seaford Branch is a busy and active one, covering the town and local communities. Contact the Chairman for more details. You are welcome at our range of events staged across the year.

"Very proud to have received national backing from thousands of young people ..."