DISTRICT'S NEW PLAN IS WIDE OF THE MARK 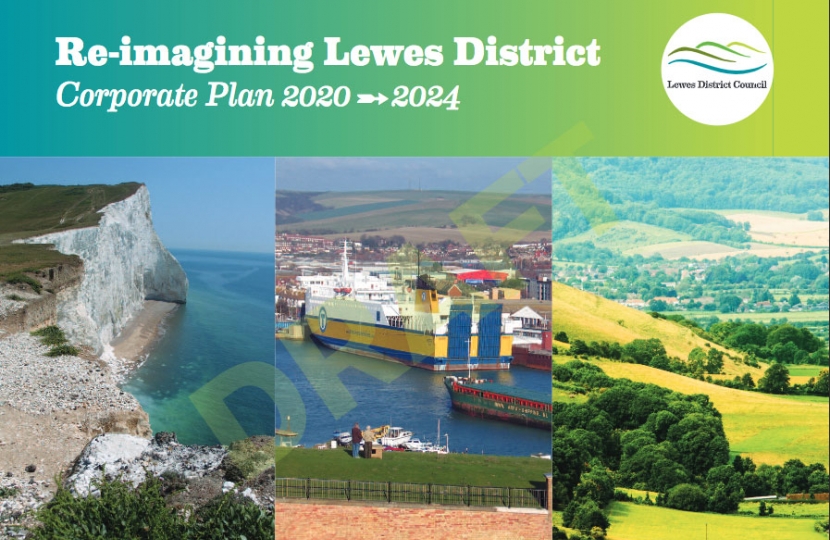 Lewes District Council's new Corporate Plan has been labelled ‘inadequate’ and ‘not measurable’, with calls for it to be taken back to the drawing board.

Following public consultation, Lewes District Council published its plan for 2020 to 2024 which was compiled by the authority’s ruling anti-Conservative alliance.

While the Plan was approved at Full Council last night (Mon 24 Feb), it was heavily criticised by several Conservative members who make up the largest Party on the council but are not in control.

Conservative Group Leader, Cllr Isabelle Linington, said she welcomed the colourful document which contained several noteworthy promises, but told the meeting that most of the goals listed did not meet the SMART criteria of being Specific, Measurable, Achievable, Relevant, and Time-bound. It was woeful that the Plan omitted reference to infrastructure development to support the proposed new building across the district, with no mention of working with partners and other authorities on infrastructure, save for a reference to cycling provision.

Cllr Linington, who represents Chailey, Barcombe and Hamsey Ward, also pointed out that the Plan omitted any goals to promote digital inclusion and good access to mobile and broadband networks, something of particular concern to those in rural Wards such as hers. It was “commendable”, said the Conservative Group Leader, that money generated locally should be kept in the district and spent locally, but it was going to be virtually impossible to know whether this target was achieved since it is not measurable.

“It has obviously been extremely difficult for the four groups running the council as a co-operative to include items where they have policy conflict, so they have been simply neglected”, she said. “And that is why much of this Plan reads like a manifesto rather than the high-level, strategic document for the benefit of the entire Lewes District, its residents and businesses that it needs to be.

“Nonetheless, to have targets which cannot be measured makes a complete nonsense. Goals must be measurable while areas of key concern to those who  live and work across the District need to be included before this Plan is of any real value,” added Cllr Linington.

Cllr Sam Adeniji (Conservative, Seaford South) said he was disappointed that the Plan did not go further in encouraging employment across the Lewes district. He felt that a great opportunity had been missed to boost the future prosperity of the area.

For Cllr Lynda Duhigg (Conservative, Peacehaven East) the omission of where the much-needed 200 proposed new council houses would be accommodated left a lot of questions unanswered. “We have very little land, little space in much of our district to take these new homes”, she commented. Where are they going to go? We are not told. Probably those who compiled this plan have no idea either. Plans have to be practicable and not just glib suggestions in a brochure.”

The Conservative group have pledged to hold the council’s ruling Cabinet to account on their proposals to ensure they meet the needs of everyone in the district.

Great opportunity missed to boost the future prosperity of the area.